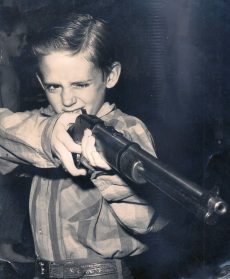 When I was in third grade, we lived in Fairbanks Alaska, and I wanted to be a grown up. Because Alaska is frontier wilderness, a lot of the activities I remember were around doing things in the outdoors with the family.

I wanted to be grown up, so I got a paper route (at eight years old I was the youngest one they’d ever had). I remember that I had to borrow my Dad’s typewriter to write the circulation department telling them why I wanted to be a paper boy.

I also remember my parents making me take my little brother with me so I wouldn’t get into trouble and getting into trouble anyway (but that’s a whole bunch of different stories).

Going on toboggan rides through the trees, picking berries in the summer, and shooting skeet. I was 8 years old, and I thought the skeet shoot was the coolest thing I’d ever seen.

I felt like the kid in “A Christmas Story“, only nobody was telling me I’d shoot my eye out.

They did tell me that it was going to knock me on my ass when I pulled the trigger (it did) and that I needed to respect the weapon (I did). I had a deep respect for the weapon, and an immediate understanding of the fact that being on the wrong side of a loaded gun was a bad thing.

And because we lived in Alaska, and you needed to be a sportsman, our first Christmas (or maybe it was my birthday, don’t remember for sure), my parents bought me a gun.

It was a little .22 caliber rifle, and I learned all the things needed to make sure that it was used safely. Despite being in a country where guns are common, over the next few years, even counting target practice, I don’t think I saw anybody shoot a gun more than a dozen times.

The gun was put away until I was much older as we moved to places with even fewer reasons to have one.

Then in my junior year in high school, I got recruited to help my Grampa out on his ranch (in Ramona, California). One of the daily chores was to shoot rabbits and squirrels, which had so overpopulated the area that it was next to impossible to grow a garden there.

Grampa had a 30.06 rifle that he used to shoot down the hill at the big granite boulders in an attempt to kill four or five at a time (there were dozens that would sit on those rocks). Every morning, I would go out as the sun was coming up, and hunt rabbits. I learned quickly that it was important to be a good shot: hearing a rabbit scream would probably be enough to make me a vegetarian these days.

Even then, going out every day all summer for two summers, I didn’t go through a box of shells. It only takes on bullet to kill something.

The Sandy Hook madman shot 150 rounds at children from guns that are intended to shoot at people who are shooting back. They didn’t have a chance.

Congress needs to get comprehensive gun reform done AND include the assault weapon ban – this has nothing to do with the NRA, or our second amendment rights and everything to do with our ability to behave as a rational society that protects our citizens from this insanity.

Way back in 2013, when the economy was really being stupid, I took the leap of faith that taking a job in Salt Lake City would be a good move. […]

Most of my career was spent in healthcare, working in IT for providers, coordinating third party payments, and being a consumer battling with crazy multi-layered payment systems. I was lucky […]

Today we celebrate Thanksgiving  in the US, an American holiday where we count our blessings, and in that spirit, I give thanks for my health and well being. I’m extremely […]