Last night I went to an event hosted by Redhat, Infogain and Azul Systems as a networking opportunity and to learn a bit from the vendors with my friend George Ross. It was held at Tesla Motors in Menlo Park, and the door prize was a ride in the new Tesla Roadster.

After the presentations, they had the drawing, and I was thinking it would be cool if George or I got picked. Right about then, they called out “Rob Weaver of AccuWeaver LLC” … I was the first pick to get a ride (they gave 5 people the thrill ride).

Naturally I’d been admiring the car the whole night, it’s a very cool looking sports car that is entirely electric. Does 0-60 mph in 3.9 seconds, and has a range of 240 miles on a charge.

So the guy pulls the car up (no noise at all) and I get in. Well actually, it was more like I fell in. I wasn’t prepared for the fact that the seat of the car sits below the frame rails, so you sit only a few inches off the ground. I was very excited and anxious to see how the car felt as they snapped this picture: 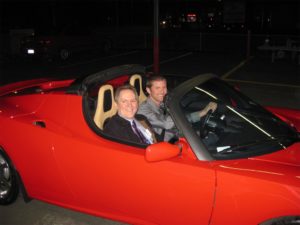 Then we pulled out onto the street with a smooth quiet glide. When he finally hit the accelerator, I was pushed back in my seat at with at least as much acceleration as you’d feel in one of the old muscle cars we all used to covet, and no jerks as the gear shifts (because the car only has one gear).

The other thing that impressed me was that there was no apparent drop off in power. As we approached 60, the force pushing me back in my seat was the same as it had been when we started off from a stop. The only noise was the wind through the top, and the whine of the electric motor.
On the way back, there was an empty stretch of road, and the car easily hit 80 and felt like it could be over a hundred in the blink of an eye. It was definitely a thrill ride, and I would have loved to drive it myself (although I probably would have been more conservative with it).

We pulled back in, and I’m sure my smile in the “after” picture tells it all: 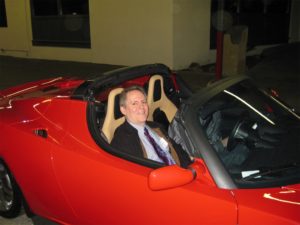 I’m definitely impressed.  Just slightly cooler than my Prius, and way better gas mileage, I only need three jobs at about twice my normal rate and a loan on my house and it’s mine….

CloudFormation is the Amazon Web Services (AWS) method of creating repeatable infrastructure as code (technically templates that describe resources to be built in AWS). There are on occasion [...]